Many breakthroughs have been made in providing guarantees of safe drugs and food for the entire nation. “In the past three years, Badan POM has made many changes as a result of collaboration work. This three-year period is quite significant for Badan POM in improving itself to develop the performance of drug and food supervision,” explained the Head of Badan POM, Penny K. Lukito. This three-year phrase also marks the on-going leadership that this woman, who is familiarly called Bu Penny, has taken. 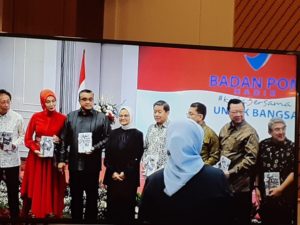 BPOM has transformed drug and food supervision by establishing a command centre system. BPOM exists in all corners of Indonesia to protect people so that they only consume safe and legal drugs and food, to facilitate and support the drug industry in Indonesia as well as to show BPOM’s support for Micro, Small and Medium Enterprises in drug and food sector.

This site uses Akismet to reduce spam. Learn how your comment data is processed.